Posted on June 8, 2012 by gailfaithedwards 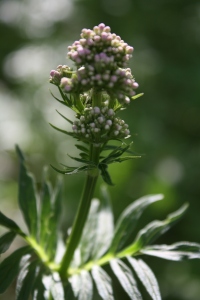 Lovely in bloom and sweetly aromatic, Valerian is a mineral-rich tonic that is exceptionally nourishing to the nervous system.   It is a powerful nervine, carminative, and acts as an antispasmodic agent as well. This herb exerts a remarkable effect on the cerebrospinal system. Valerian is warming, slightly bitter and has mild anodyne properties, so it helps to alleviate pain and promote deep, relaxing sleep. It is widely used as a sedative.

Valerian is an effective tranquilizer that is not addictive in recommended dosages and does not cause morning grogginess.  In my opinion it is a much wiser choice of tranquilizer than pharmaceutical drugs, which can have many side effects, including decreased coordination, decreased mental functioning, inability to concentrate, and memory loss.  Did you know that the risk of breaking a bone is five times greater when using tranquilizers?   In addition, tranquilizers are addictive and drug withdrawal can lead to anxiety, restlessness, sleep disturbance, headaches, and seizures.

Small doses, 5-10 drops of valerian fresh root tincture or half a cup of dried root infusion, have a calming and soothing effect on the nervous system. 10-20 drops might put you to sleep. In larger doses, valerian can cause hyperactivity and headache. 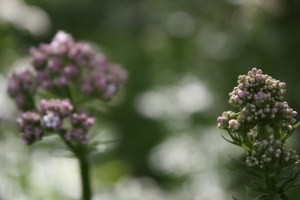 One of my former students, Belinda, is a devoted horsewoman. She told me her horses are high-strung and don’t naturally travel well. She loves taking them to horse shows, so routinely gives them a bit of valerian in their feed before leaving. Belinda tells me her horses are calm and well behaved both during the trip and upon arrival, due to calming valerian.

Hildegard of Bingen, one of my favorites of the “old time” herbalists, recommended valerian as a tranquilizer and sleep aid. Valerian is a superior sleep inducer. To ensure a good night’s sleep I’ve taken 5-10 drops of valerian tincture in a bit of water, or drunk a cup of infusion half an hour before bed. Valerian can become habit-forming so I don’t suggest using it consistently for more than three weeks in a row without a break. Scullcap, oatstraw, chamomile, passionflower and St. John’s wort are all good and effective alternatives.

Valepotriates are the active sedatives in valerian. They are found in all parts of the plant  including its leaves and flowers, but are most concentrated in the root. Valerian’s other constituents include valerian, formic and acetic acids, boneol, and pinene, a glycoside, alkaloids, and resin.

In magical lore, valerian is considered an herb of protection and an herb of witches. The plant was used to clear the energy of an area, and also for self-purification.  I’ve used valerian flower essence to help develop a calm, serene, well-balanced approach to life.

Valerian is a beautiful perennial plant and grows quite happily in any moist, rich place. In my garden and around the farm, it reaches about six feet tall. The plants have bright-green, deeply toothed, longish leaves that form a rosette the first year. From the second year on, valerian puts up a tall stalk topped with an intoxicatingly fragrant whitish-pink umbel. Just smelling these blossoms is enough to relax me after a stressful day. But the roots are another matter!  Some people love the aroma of valerian roots, others cannot stand it.  It’s well known that rats are attracted to the strong odor of the root. Legend describes the Pied Piper with valerian roots in his pockets as he led the rats out of Hamelin.

There are more than 150 species of Valeriana growing all over the world in temperate climates. It is the species officinalis that is traditionally used for medicine making, though some other species have been used as well.  We start valerian seeds in early spring to transplant out about six weeks after  germination. Valerian’s white roots grow in a dense cluster with many little rootlets and look like a thick head of dreadlocks. The freshly dug roots smell like earth to me, and I love them. I’d say that Valerian just isn’t an herb for those people who find the odor offensive.

We dig valerian roots in fall after the plant has died back and tincture fresh valerian roots in alcohol or vinegar or dry them on a screen in a well-ventilated place, out of direct light. We store the dried roots in a canister or other air-tight container for later use as teas and infusions.

Gail Faith Edwards is an internationally recognized Community Herbalist with over thirty years experience. She is the author of a number of books about herbs and has taught in India, Italy, Poland and Russia, at the Yale School of Nursing, the University of Maine and the College of the Atlantic, among others. She is the founder of Blessed Maine Herb Farm and Director of the Blessed Maine Herb Farm School of Herbal Medicine. She is the mother of four grown children and the grandmother of four grandsons. Gail leads sacred journeys and ancestral pilgrimages to Southern Italia twice a year.
View all posts by gailfaithedwards →
This entry was posted in Uncategorized and tagged Health, Herb, Sedative, Sleep disorder, tranquilizing, Valerian, Valeriana, Valerianaceae. Bookmark the permalink.